Is it too hot for Zazu? 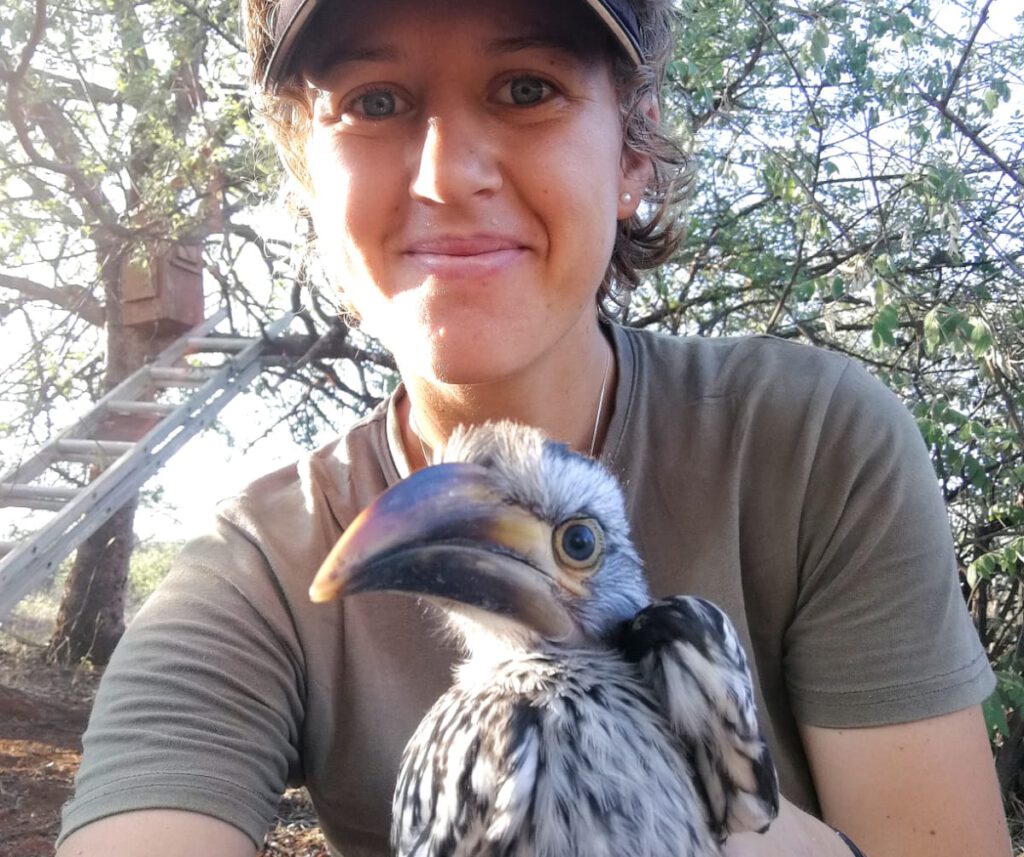 Hornbills’ popularity is partly due to Zazu from the Walt Disney Picture film, The Lion King, but also due to their peculiar breeding strategy, in which the female seals herself inside the nesting cavity. Their characteristic long, down-curved and brightly colored bills make them one of the most striking birds to sight, to birders and non-birders alike. Although their breeding strategy is well known, the effect of climatic variables on their breeding success have not gained much attention in the past.

On 29th of April 2021, Grietjie Stander was the guests of honor. Her presentation was divided into two parts: first Grietjie introduced the Research Centre she works at, Mogalakwena Research Centre (MRC), located in the northern parts of the Limpopo province in South Africa. Grietjie is working at MRC as a wildlife research assistant and field guide. MRC provides research internship opportunities for students and volunteers in the fields of ecology, horticulture/agriculture, craft art and anthropology. The ecological projects at MRC are the most popular with students and volunteers due to an array of wildlife found on the Mogalakwena River Reserve (MRR). These projects mostly focus on species competition, species vigilance, behavioral adaptations and feeding and social behavior. Grietjie’s work includes a bit of everything, but she mostly supervises students and assists them with data collection. She also assists with the daily running of the MRC and shows students the big and the small of the South African bush.

During the second part of the event Grietjie introduced her M.Sc. thesis she is currently conducting through the University of Limpopo, South Africa. Grietjie’s data collection takes place at the MRC which is home to three African hornbill species: African Grey hornbill, Southern Yellow-billed hornbill and Southern Red-billed hornbill. The MRC has distributed nest boxes throughout the MRR and all three hornbill species use the nest boxes as breeding sites. Grietjie’s study mostly focuses on the effect of temperature on hornbill breeding success. Her study can broadly be divided into two parts: 1) the effect of temperature on male provisioning rate and 2) the effect of temperature on female and chick body mass. Due to their unique breeding strategy, hornbill females, and later the chick(s), are confined to the nesting cavity and do not leave it for the duration of the nesting period. The hornbill males are thus solely responsible for provisioning the female and chicks during this time. Grietjie is interested in determining how the male’s trade-off between provisioning the nest and regulating his own body temperature will influence the breeding success of the three species. Since regulating his own body temperature takes time and energy, the male hornbill will most likely have less time and energy to provision to the nest on high temperature days, resulting in less food being provisioned to the nest. Due to the confinement of the female and chicks to the nesting cavity and their dependence on the male for food, this decrease in male provisioning rate could affect their body condition and thus the success of the breeding attempt. Grietjie is also interested in analyzing the effect of nest temperature of the female and chick(s). The female and chick(s) are sealed inside the nesting cavity and when nest temperatures rise, they do not leave to find cooler areas but rather regulate their body temperatures through evaporative cooling, which results in energy and water loss. This increases their dependence on the male to provide enough food for them to replace the energy and water loss to avoid a negative effect on their body condition and growth. If they don’t get enough food, the female and chick(s) will probably decrease in body mass and growth rate, which influences the success of the breeding attempt. Grietjie aims to determine how hornbills will be affected by high temperatures during the breeding season and how climate change affects this.

Grietjie provided the audience of very interesting information about the unique breeding strategy of hornbills, her methods and hypotheses of her thesis. She also provided information of the importance of hornbill conservation work, since the survival of many hornbill species are threatened due to habitat loss and illegal hunting. Grietjie is currently still collecting data and could not present final results. However, her preliminary results show that chick body mass is negatively affected by temperature, with chicks gaining less weight (and in some cases even losing weight) on high temperature days (> 35 °C) compared to low temperature days (< 35 °C).

As the Den Bosch group of FFNA, we very much enjoyed this guest lecture. Grietjie is an example of how passion and hard work can get you where you want to be. She offers everyone to get in touch with her if they have any questions regarding her M.Sc. thesis as well as with Mogalakwena Research Center for  internship and volunteer opportunities, as well as post-graduate studies.