“The Zooniverse” is the world’s largest and most popular platform for people-powered research, as they describe themselves. Most projects include large databases of camera trap or other pictures, and as you can imagine: if you have quadrillions of those, it could speed up the process of analysing quite a bit, if you include many people! That is exactly what we did in the most recent Zooniverse evening, which took place on the 10th of December, and focussed on the Snapshot Hoge Veluwe project.

After three very interesting and inspirational talks on topics such as citizen science, rock dust and OV-bikes caught on camera-traps, given by Dr. Patrick Jansen (WU professor), Laurens Dijkhuis (WU student) and Sylvana Harmsen (WU PhD & FFNA-Wageningen), we dived into the world of wildlife in National Park De Hoge Veluwe.

Together, we classified thousands of camera-trap images, a great result!
All participants tried to find all of the animals and “movements”  indicated on our bingo-card (anyone ever seen defecating animals on a picture?), and this made for a competitive evening, with a prize for the one to first get bingo! 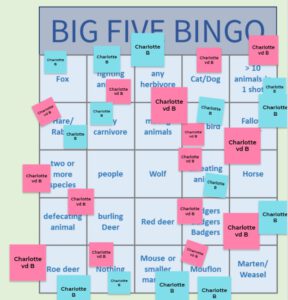 Throughout the evening, many difficult, beautiful or really weird pictures were shared in the MSTeams chat, and even a GPS-tagged deer was captured on camera! We ended with a very colourful quiz to test everyone’s knowledge on de Veluwe and its wildlife (did you know you can lend sleds while in the national park?). All in all, it was a succesful evening, and we hope to organize many more Zooniverse evenings in the time to come!