The success story of nature development in the Netherlands 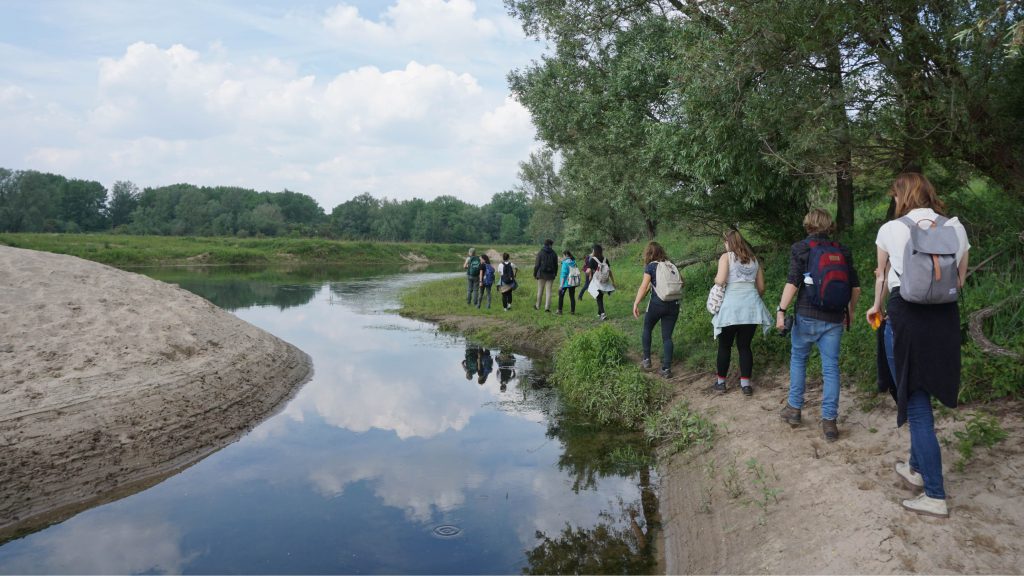 Where agriculture was still to be found a short time ago, the Millingerwaard has developed into a nature reserve with a very high biodiversity and working ecosystem. Sunday the 19th of May, Caroline van der Mark took us on an excursion through the Millingerwaard. We learned about natural processes, the key function of bigger animals in this area such as the Konik horses, Galloway cattle and beavers that shaped this area.

Our tour started in the bus when Caroline gave us a small introduction about ARK Nature Development. When driving on the dyke we had a beautiful view over the surrounding area and the Millingerwaard. This dyke protects several villages from the rising water of the river Waal. After a short drive we entered the nature area where the expedition started by foot. We were lucky with the sunny weather and after a small walk we arrived at the bird observation post and spotted some special bird species. Next, the expedition went ‘off road’ and we visited an old beaver castle. Although the beaver family was not present, we found some beaver tracks and could see how they built their home with an entrance to the water, where a group of frogs lived and started to vocalize when they noticed us. Our expedition through bushes went on and when we reached an open field we came across two Koniks horses.

Halfway we arrived at the Waal. Here a lot of Galloway cattle were resting along the river, under the trees. It was time to have a break ourselves while enjoying the view of the water.

One key message Caroline gave us is that you can do what you love if you follow your passion. The development of the ARK organisation is a great example since it has been expanded to a large organisation while it started with a very small and simple idea. A couple of very passionate people wanted to realize robust nature and created large nature areas with interconnections. Years later they showed that if you allow nature to regulate its own development, different natural processes will result in fascinating and multiple plant and animal species taking over the area. Eventually this all resulted in a very biodiverse landscape. The Millingerwaard is a great example of how nature can return.

After the tour there was time to drink something and to chat at the cafe before the bus took us back. It was a successful sunny day exploring nature!