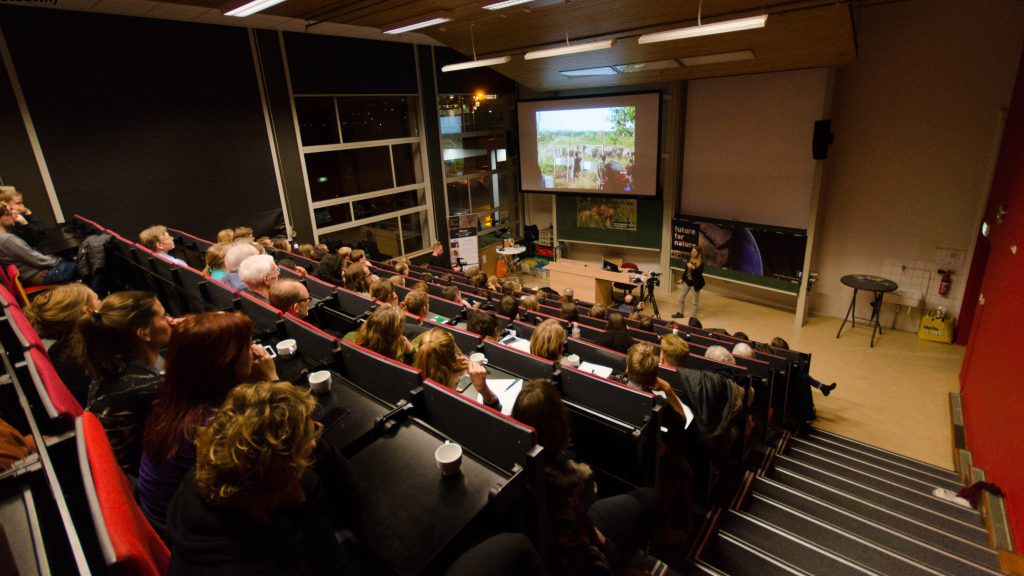 Ever wondered what life is like as a conservationist? If you are, you are not alone! Almost one hundred participants joined FFN Academy for an inspiring lecture by Antoinette van de Water. This ‘Heldin van de Wildernis’ just came back from Thailand and was kind enough to step by in Utrecht to tell us all about her volunteer work in an elephant sanctuary and about her life-long mission to restore people’s ability to co-exist with elephants. Antoinette is the founder of ‘Bring the Elephant Home‘, a foundation that fights for the protection of elephants and their habitat together with local organisations and people in Thailand and Borneo. After many years of fighting for the freedom of elephants that are abused in the Thai tourist industry, Antoinette and her foundation are now fully focussed on wildlife conservation efforts. In her lecture she particularly showed us how science has been crucial to demonstrate the effectiveness of several solutions to reduce human-elephant conflicts and thus to convince people to take action. Under the supervision of Future for Nature Award winner Dr. Lucy King, Antoinette has now successfully tested beehive fences as an elephant deterrent measure in Thailand. At first, the local farmers did not understand how the beehives would prevent the elephants from destroying their crops. However, Antoinette’s carefully designed projects helped her gain the trust of local people. Now many of the farmers co-exist peacefully with elephants. Some farmers even abandoned their initial crops and are now fully focussed on the production of honey! A win-win situation! One might think that Antoinette would take a break after this success story, yet this is far from the truth. She is in the middle of moving to South Africa to set up a new research station and continue her research on bee-hives and elephants. Antoinette explained that the situation in South Africa is very different from what she experienced in Thailand. For example, the main threat for the African elephants is not the destruction of habitat, but the illegal killing of elephants for their ivory tusks. Also the rules and legislation in South Africa on human-elephant conflicts are quite different from those in Thailand. Antoinette showed us that conservation together with science and perseverance can really make a difference and I think that I speak on behalf of all other visitors if I say that we all truly felt inspired by her talk! By Nick van Doormaal