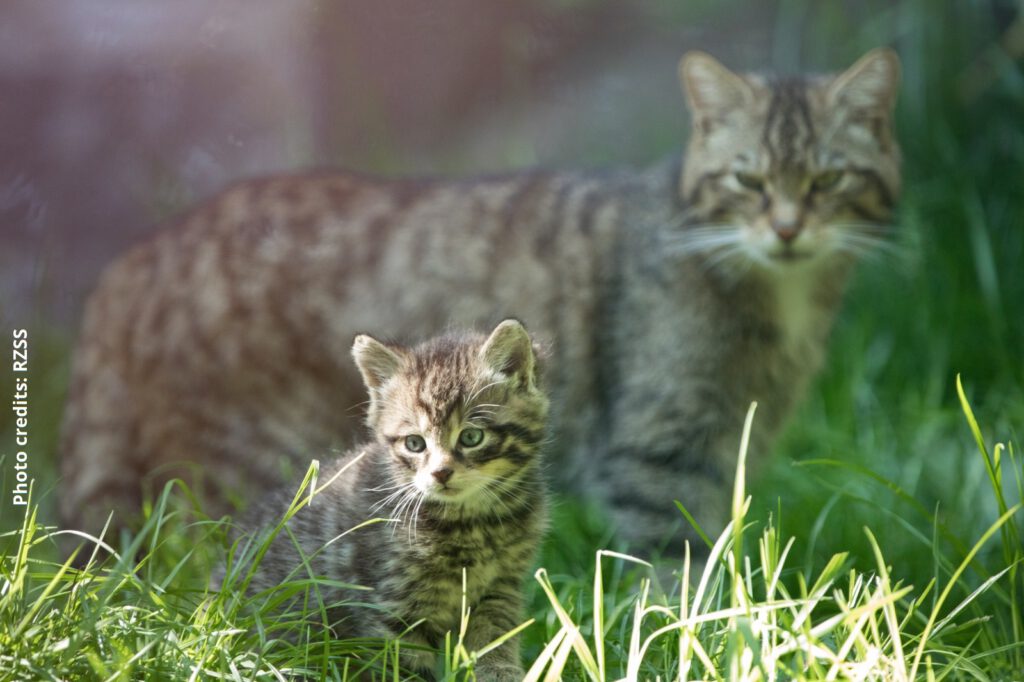 The first wild cats that pop up in your mind are probably medium to large-sized species like tigers, lions and cheetahs. But what about the smaller ones, like the flat headed and black footed cat? Or the Andean mountain cat and the Pallas’s cat? These smaller cats, which are around the size of your average domestic cat or even smaller, represent the biggest percentage of all the wild cats around the world!

Did you know that there are 41 wild cat species?

On the 22nd of January 2021, the Future For Nature Academy (FFNA) hosted an interactive lecture about wildcat conservation in Scotland. The speaker was David Barclay, conservation manager for the RZSS (the Royal Zoological Society of Scotland). It was a very successful evening for many people, as this lecture was one of the most well-attended activities ever organised by the FFNA: over 100 people tuned in!

David’s main interest is carnivore conservation and research. For the European wildcat (Felis silvestris), David functions as the breeding programme coordinator in the UK. During his lecture, he made the audience aware that it is a worrying time for wildcats. Where they were once widespread in the UK, they are now only found in the Scottish Highlands. This population reduction is mainly due to historic hunting and habitat loss, the latter of which resulted in even more threats for wildcats: hybridisation and diseases. Experts already knew that wildcats were in trouble, but that the wildcat population in the UK would be in such a troublesome state that the species is now considered functionally extinct, was unexpected. There are still a few individuals left, but not enough to form a viable population. The last wild felid species in the UK is therefore at a junction: the species can either recover in the following years or truly go extinct.

Did you know that only within the last century wildcats in Scotland showed a sharp decline?

The latter possibility is not an option in the eyes of David and the RZSS! Thanks to the EU LIFE fund they were able to set up a 6-year (2019 – 2025) recovery plan and breeding programme for the European wildcat in Scotland, which will also include habitat restoration. This is the first large-scale carnivore breeding-releasing project. The RZSS aims to release about 20 (GPS-collared) wildcats each year to eventually obtain a small but stable, viable wild population. In later phases of the project, a long-term, sustainable approach to wildcat conservation (e.g. through tourism) will be established. This project sparks hope for the future of the European wildcat in the UK!

Wildcats are now one of the most important projects for David and the RZSS. Information about problems and solutions concerning the status of the wildcat species in Scotland was delivered enthusiastically by David. His passion really transcended to the audience, as one of the most frequently asked questions was about internship possibilities at the RZSS and/or the wildcat project. At the same time, the audience’s knowledge was tested by making use of interesting questions about wildcats. Jess Wise, RZSS’s first conservation engagement management, was a great help in smoothly and lively handling the answers that were given by the audience.

Did you know the wildcats in this project will be trained to live in the wild?

When it comes to David, he is optimistic and absolutely determined to save the species. He believes that the Scottish Highlands can be rewilded and he will do everything he can to let his children experience wildcats in the Highlands. He showed us some footage of wildcats trained in pilot enclosures at the back of one of the parks, which shows how majestic it would be when these sceneries would take place in the wild. Even when your project starts during a pandemic and with Brexit being a fact, David believes that there is light at the end of the tunnel – always. “We just have to find effective ways to get through it, so that we can succeed”, he says. That concluded this exciting evening on a positive and hopeful note!