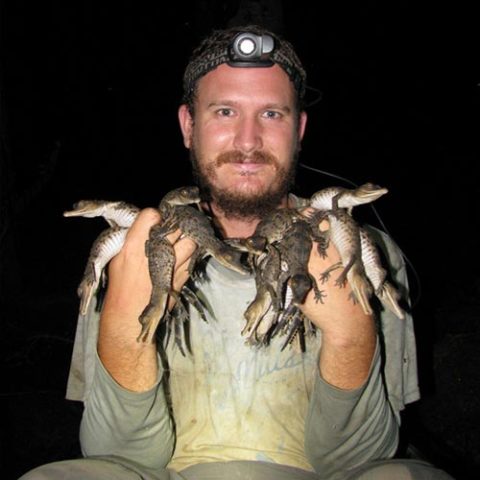 It is one of the most worshipped and at the same time, most feared animals since time immemorial. Its rough skin and hazel eyes remind you of the ancient dinosaurs. It is an utterly fascinating creature that is threatened by the impact humans have on its environment.

On the 25th of February, Matthew Shirley, the 2016 FFN award winner, gave a guest lecture during which he presented different facts about crocodiles and pangolins as well as his approach to wildlife conservation. The event was divided into three parts. Firstly, Matt introduced the audience to crocodiles in West Africa, his conservation efforts and the discovery of a new species. The specie Matt has focused on, the West African slender snouted crocodile, turned out to be composed of two species with distinct genes. In fact, through his research Matt and his colleagues could show that the West African slendersnouted crocodile (mecistops cataphractus) has 34 chromosomes, while the Central African slender snouted crocodile (mecistops leptorhynchus ) has 32 chromosomes. While this discovery is extremely exciting it is also alarming at the same time, since it reduces the population of West African slender snouted crocodiles to only around 500 individuals ranking them as critically endangered. The specie is especially threatened by loss of their natural habitat causing an increased natural competition and pollution, but also by human activities such as pouching since their meat and skin are highly demanded, especially in South East Asia.

As for his work with Pangolins, he provided the audience with some information about there being 4 species of pangolins in Africa. Unfortunately, they are a target for unsustainable trade, especially when it comes to their protective keratin scale, being valuable as medicine in Asia.

Moreover, Matt provided a really insightful presentation to his approach to wildlife conservation. According to Matt, wildlife conservation demands the courage to forget the bandwagon and turn away from the status quo. While attention is widely focused on mammals in conservation, Matt opted for crocodilians out of which 36% are critically endangered. Furthermore, the 2016 award winner also stressed the importance of communication in his conservation work at all fronts. You need to deliver bad news about the decline of species to authorities in a clear and consistent way. You also have to understand and collaborate with locals without creating hierarchies or dependencies, since, according to Matt, they are the key to successful conservation work. Another highly important factor is convincing communication when it comes to the application for funds, since projects are based on financial support from organizations, private donors and so on. Last but not least, communication among the team members of a project group is crucial.

After his very inspiring talk, the audience had the opportunity to direct their questions to Matt and interact with him directly. Throughout this Q&A, one of his most resonating statements was that wildlife conservation is not a problem revolving around the environment or animals but around communities and people. In fact, we don’t need to protect species or nature, but we need to change ourselves and the way we value other living beings. Since, caring for what holds value is inherent to our nature.

As the local group in Zwolle, where all of its members study a project management program organized the guest lecture, it concluded with a discussion about project management and grant writing. During this discussion Matt stressed that in order to work in the conservation field, you do not need to be a scientist. Business knowledge is also highly needed to financially sustain conservation projects. Furthermore, he encouraged everyone to build inspiring networks and offered the opportunity for internships to FFNA members.

By: Kathrin Bangert and Klara Wrusch